The United Kingdom is blessed with a fairly mild winter climate, but it is not uncommon for a significant snowfall to occur at least once every winter, bringing with it the usual transport chaos and school closures. In Scotland and North East England, heavy snow is more common and the problem increases with altitude. For farmers, especially those with livestock, the snow is a cause for concern and, if possible, many farmers will try to bring their animals indoors during the worst of the weather. For their sake, it is essential that the buildings erected on farms and elsewhere are sufficiently strong to withstand the worst winter snow, including drifted snow where appropriate. Fortunately, there is a relatively simple design method that frame manufacturers can follow to ensure that their buildings are safe. This article aims to describe this method and highlight the key issues.

There are two fundamental types of snow loading that can act on a building structure and it is important to distinguish between them:
• Uniform snow loading
• Snow drift

All buildings should be designed for uniform snow load as there will always be an element of distributed snow, even if some drifting occurs. Some buildings, especially those with obstructions against which the snow could accumulate such as parapets or walls, should also be designed for snow drift loading. While snow drift loading is usually much higher than the uniform snow load, it is limited to a relatively small area and is subjected to lower safety factors by the design standards. Snow drift loading may also occur on buildings that are susceptible to snow sliding off a higher roof onto a neighbouring lower one.

All snow loading ultimately has to be carried to the foundations by the cladding, purlins and building structure. It is, therefore essential that building designers take account of the snow when designing all elements of the building (cladding, purlins, rafters, columns and foundations) and the connections between them. For steeply pitched roofs, the building designer should also give consideration to the down-slope component of the snow loading acting on the roof cladding and ensure that sufficient fasteners are provided.

Location
Some parts of the country are more susceptible to snowfall than others. A number of meteorological factors influence the depth and frequency of snowfall at a given location, beyond the expertise expected of a steel frame manufacturer or structural engineer. Fortunately, data from many years of meteorological records have been analysed to produce simplified guidance in the form of a snow map and a simple equation to allow for site altitude. Both are published in the National Annex to the BS EN 1991-1-3. The snow map, which has been reproduced in Figure 1, divides the country into a number of zones, according to the predicted intensity of the 1 in 50 year snow event. As one might expect, the highest snow loading occurs in Scotland and eastern areas of England.

Altitude
The depth of snow fall naturally increases with altitude. This is catered for by a simple equation in BS EN 1991-1-3 that gives site snow load in terms of site altitude and snow zone (taken from the map). It is therefore a relatively simple matter to obtain the ground snow loading for any location in the UK. Multiplying by another factor, known as the shape factor, gives the uniform snow loading on the roof of the building.

Parapets and obstructions
Parapets and other obstructions against which the snow may accumulate cause snow drifts resulting in localised high snow loads well in excess of the uniform snow load. These need to be taken into account in the design of the roof cladding and its supporting structure and may require additional local strengthening of the roof (e.g. purlins at closer centres). Where snow drifts against a wall or parapet, there is also the possibility of a horizontal force from the snow onto the cladding and structure. In extreme cases this could give rise to sway in the frames.

Neighbouring roofs
Where a building is erected adjacent to an existing taller one, building designers need to be aware of the possibility of snow falling off the higher roof onto the lower building causing local overloading of the roof cladding and supporting structure. The same could also be true if a low mono-pitch extension were built against a duo-pitch shed. The snow load in this case will depend on the roof slope area of the taller building and the area of the lower roof onto which the snow is likely to fall (i.e. the size of the heap formed on the lower roof). If there is a significant height difference between the two roofs, there is also the risk of impact loading due to the momentum of the snow as it hits the lower roof. This loading is likely to be far greater than the equivalent static load. RIDBA is aware of examples where such roofs have collapsed in practice.

Snow loading calculations
Snow loading is site and building specific so should be calculated for each building project. This is not as onerous as it sounds, since the only two factors affecting the uniform snow loading are the location (expressed as a snow zone) and altitude. It does however mean that a steel frame designed for a farm in Cornwall is unlikely to be able to withstand the snow loading of a typical winter in North Yorkshire (although the wind loading is probably worse in Cornwall). Taking account of the influence of neighbouring buildings and obstructions, the snow drift loading could differ between two buildings on the same farm!

The magnitude of the snow loading should be determined using BS EN 1991-1-3 (part of Eurocode1) and its UK National Annex. For agricultural buildings, it may be permissible to apply a reduction to the snow loading obtained from the Eurocode, depending on the use and occupancy level of the building. For further details, see BS 5502-22. When designing the structural frame, the snow loading is assumed to act at the same time as the dead load (e.g. self-weight) and any positive (downward) wind loading. BS EN 1990 gives the appropriate safety factors to apply to this combination of loading. Access for maintenance (imposed load) is considered as a separate load case and is combined with the dead load only. Snow drift loading is considered separately and is treated as an accidental load case with lower load factors. 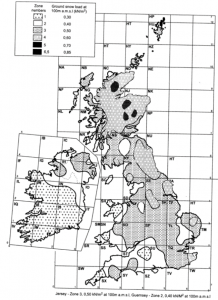 Figure 1 – Characteristic ground snow load map taken from UK National Annex to BS EN 1991-1-3
Permission to reproduce extracts from British Standards is granted by BSI Standards Limited (BSI). No other use of this material is permitted. British Standards can be obtained in PDF or hard copy formats from the BSI online shop.

The design of any steel or timber framed building is dependent on the magnitude of the snow loading acting on the building. Since the snow loading is location specific, it should be calculated for each and every building project, although in practice it may be simpler to specify a standard uniform snow load calculated for a particular zone up to a specified altitude (this approach will be conservative for most buildings). Snow drift loading is building specific and bespoke calculations are required for each case. If in doubt, frame manufacturers should seek assistance from a qualified engineer or speak to the RIDBA technical consultant.